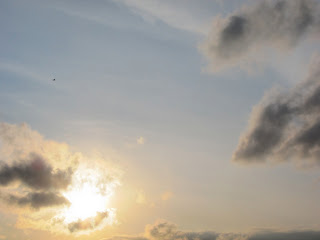 It began before sunrise, when I awoke in a nervous fret. I often awake in nervous fret, for as soon as my brain wakes up, it begins to list all the things I need to do that day. The next day. In the next 5 years. What are my long term goals for life?! What about my future?!?! Seriously, I think about all this within the first few minutes I'm conscious while still lying in bed. It gets to be a problem sometimes.
But on this particular day, I had an important audition to worry about. One that I had been preparing for and hoping would go smoothly. Every minute until the scheduled appointment seemed to tick by in slow motion as I anticipated all it would entail. And then suddenly, for as long as I've dreaded today's audition, it was over in a matter of minutes. Or what seemed like mere seconds.
Instead of relief though, I felt like a deflated balloon. It didn't go bad, it just didn't go great. I was hoping for raving reviews and a job offer...or at least a word or two of positive feedback. Instead I got a "Thank you, we'll be in touch." I immediately had to drag myself to work where I played for ballet rehearsals, but my mind was elsewhere. The class seemed to drag on. The drive back home took forever. And even though technically the day was over, I still had to wait for Eddie to finish his shift at midnight.
For the first day of summer, I didn't feel the care-free things you're supposed to feel today. Instead, I felt that it was very literally, the longest day of the year!
But the nice thing about a long day, is when it's over. The sun goes down. My mind shuts down. And when I wake up in the morning, the days will go back to being normal.

Busy Bee Suz said…
I am sorry your day was not more magical....that deflated feeling is not a good feeling. I hope the next is better for you...and the summer is just starting. right?
June 21, 2011 at 10:07 PM

Anita said…
I have days that don't go as planned and I'm somewhat disappointed when that happens. But then, I think of all the good things that happened, like the two long conversations I had with my mother and my friend today. I felt that it prevented me from things I wanted to do, but then I felt blessed to have both of them in my life.

Rick said…
I've had those feelings too when you work hard towards something and it just doesn't go as planned, or without the desired results. And then there are times when you feel that way but you get a huge surprise - they WERE impressed, or the results come back way better than you thought at the time. And you realize that the glass IS half-full (or maybe more !).
June 22, 2011 at 12:09 AM

Linda at To Behold The Beauty said…
I know you're a woman of faith, Elizabeth; so I know you understand that God's hand is there, even in our disappointments. He wants us to cast our cares on Him because He cares for us. Hang in there, my friend, and trust God to lead you to just the right opportunities at just the right time.
June 22, 2011 at 3:35 AM