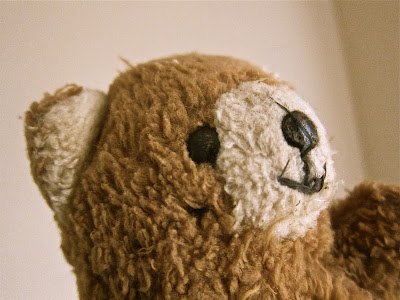 When I was a little girl, I had a cherished stuffed dog who I imagined could fly with his brown, floppy ears. One day, I was at a department store with my mother and mistakenly left the dog in a dressing room. Of course, neither of us realized it until after we left the store. At home, I waited panic stricken, as my mother made phone calls to the Lost and Found, and several store managers. I never saw my little dog again, but I imagined that he found his way to the toy section, and lived there happily with new friends.
There was another childhood friend of mine, a stuffed bear named Theodore. He had the most compelling black eyes and pudgy tummy. If ever a stuffed animal was "real," Theodore was. But whoever created my little bear, made a terrible and seemingly permanent mistake. The black line of his mouth was sewn into a frown. No matter what I did, tea parties, outdoor picnics, a doll house mansion, Theodore would never be happy. It broke my heart so much, I asked my grandma (handy with a needle and thread) if there was any way she could fix it. In no time at all, she had performed a magical surgery on my bear. When she handed him back to me, for the first time, Theodore smiled up at me. And I smiled back.
There are many lessons to be learned about happiness as a child and from a child. I hoped my dog would be happy in his new Toy Department home. My mom hoped she would find me the lost dog. I longed to see my bear smile, and my grandma longed to see me smile. We call children simple, and distract their sadness with a candy bar. But you should have seen the smile on my face this morning when Eddie surprised me with a pumpkin flavored doughnut from Dunkin Doughnuts. It's not the act itself that can bring happiness to someone, but the sentiment and meaning from which it comes.
"Love is the condition in which the happiness of another person is essential to your own."
-Robert Heinlein
~~~
Related thoughts, inspired by 2 very precious boys:
Zach's Kitty
The Things We do for Love

Dawn said…
It IS most definitely the meaning! I love this. It reminds me of a story I used to read my kids...you sound like the little girl in the book:D

Steve Gravano said…
Pumpkin donuts sound great, but not as great as the definition for happiness you found.
October 14, 2011 at 3:41 PM

Anonymous said…
All I can say is how pleased I am that you are back. I have missed your posts - your delightfully positive outlook on life ... I look forward to reading more soon...
October 14, 2011 at 5:21 PM

Linda at To Behold The Beauty said…
I've missed you, Elizabeth, but this post was worth the wait. I love that you wanted Theodore to look happy and that your sweet grandmother made it happen. And the quote you found defining love is perfect! I've never heard it expressed better.
October 14, 2011 at 10:40 PM

Anita said…
I'm reminded of my bunny named, what else but, "Bunny." I was ten years old. One day I was horrified to see Bunny being used as a cushion between furniture in a moving van. I know my mother didn't do that; I've always wondered who did.

Your story reminds me of the book and bear, Cordouroy.

holdingmoments said…
What a great post Elizabeth.
Your story of your frowning bear certainly put a smile on my face, before I go and brave the day. Thanks. :-)
October 16, 2011 at 1:25 AM

Leonora said…
Sweet post and I can't help smiling.
Happiness is making other people happy.
October 16, 2011 at 5:39 AM

laughwithusblog said…
I love remembering those meaningful moments. Sometimes I just pull one out like to make me smile on a dreary day!
October 16, 2011 at 4:25 PM

Jayne said…
Aw, and see, this post clearly illustrates just how optimistic you are and have always been--imagining, as a girl, that your lost dog was living happily in the toy section; and, longing for a smile for Teddy--doing your best to get it for him.