Magical Moment 227, "The Ruler of Scrabble" 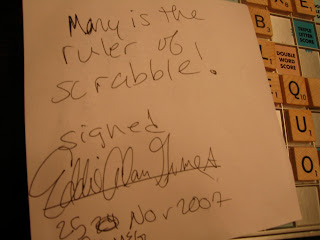 Scrabble is kind of a special game to my husband and I. We first played it years ago in the Army out of pure boredom. I was the Executive Officer of our Battery and he was the training room NCO, which meant I was his supervisor. Our offices were right next to each other, and as a brand new, naïve Second Lieutenant, I depended on his expertise quite a bit in the early days. He was not only a good soldier, but extremely intelligent. Really, he has a genius IQ of 154. Sometimes I like to play a game I call Rain Man, where I throw random, complex math problems at him and watch as he solves them in his head. He doesn’t really care for that game. But I digress.
One day, I came to work to find that several computers had been stolen. As a result of sensitive information being lost, the entire battery was forced to live in the building until someone broke down and confessed. There we were, about 50 us, trapped in a smelly, old, military building for 4 days. We marched to and from the gym to shower in the morning and slept on the floor wherever we could find a vacant space. Of course no one ever did confess and the computers were never found, but in the mean time, Eddie and I had a chance to fall in love. So thanks for that, Army.
We found an old scrabble game and played pretty much the entire 4 days. I never won one single time. I made it my mission in life to beat him and took 20 minutes for each turn, playing out every single possibility, savoring every point I earned. But it was no use. He was too smart.
A short 8 months later, we were married and free to play Scrabble as much as we wanted. We had a Scrabble board permanently set up on our kitchen table for months. And though I tried, I simply could not win. Until one magical day in November of 2007, something amazing happened. I don’t know why, I don’t know how, but I won. I stared in disbelief at the board, frozen for a few minutes. And when reality set in, I started my victory dance.
That was the beginning of my winning streak. A few wins later, I told him that if I won the next game, he would have to sign something that dubbed me the Ruler of Scrabble. Sure enough, I won again and he signed his name at the bottom of my homemade document. (If anyone doubts the validity of it, my first name is actually Mary). Since then, we’ve discovered online Scrabble and generally have about 7 games going at any given time. I beat him in all those too. Not that I’m bragging. He may win the Rain Man game, but I win the game of Scrabble!