Magical Moment 338, "One out of Eighty-Eight"

January 08, 2011
Today at work, I sat at the Black Kawai piano, playing for the dancers as they rehearsed their ballet combinations. I love choosing the songs from my repertoire list, and making them sound distinctly different and interesting each time I play them. I experiment with different chords and styles, and it keeps the long day interesting for me. However, I was immediately disappointed this morning, when I found that the low “G” on the piano was not working.
It really put a damper on the music. If I meant for G to be the bass note, it sounded as though someone hit the “mute” button for a split second and disrupted the flow. I was too focused on avoiding that G and playing the lower octave, that I couldn’t concentrate on the overall cohesion of the piece. The longer I played, the more frustrated I became. Now no one will ever know just how beautiful Mozart’s Sonata K. 331, theme from the First Movement really is, I thought with dismay.
When I mentioned it to the office so they could call a repairman, they explained with no urgency, that they already knew about it. But it was only one key, still playable, so it was not an immediate priority. And so I trudged through the rest of the classes, knowing that the beauty of the music was not complete. First because of the missing G, and second because my heart was not in it.
One out of eight-eight, who would have thought it could be so significant? It’s not like it was middle C, or something in the upper register that could affect the melody. When something is meant to work together, each one assigned its own task and purpose, and just one of those things is not fulfilling its role, everything is affected. The song, the piano player, the dancers who did not hear the music at its best and therefore lacked energy in their own art.
If you feel like something isn’t working the way it should, pick it apart. Find out what’s broken. Maybe you know what’s broken but didn’t deem it a priority because it was tolerable. But there is more to life than tolerable. There is beautiful music to be made and when everything is working together as it should, its effects are powerful, meaningful, and rings loud and clear for all to hear. 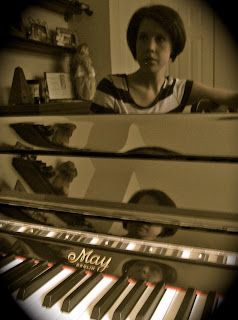 Anonymous said…
One out of 88 does indeed matter. You can open up the piano yourself and just see if there is a penny, old Christmas card or a crayon. The remedy might easy. xo
January 8, 2011 at 8:06 PM

ds said…
There's a temperamental low G on my piano that drives me nuts when it gets "sticky." I find, as you have, that I can't play. I'm nowhere near the level of any Mozart sonata, but one key definitely makes a difference. In life, as well.
Nice "moment"!
January 9, 2011 at 12:33 AM

Hello Jessica Lynn said…
I took a few piano lessons when I was a kid, but never really got to finish...I would love to play the piano!!

I am blog hopping today and thought I would stop by your blog.

I hope you will stop by and follow either or both of my blogs.

Jessicas Lil Corner is my family blog at http://jessicaslilcorner.blogspot.com

So Stylilized is where I am currently offering FREE custom blog designs at http://sostylilized.blogspot.com