Magical Moment 588, "Queen of the Night"

October 19, 2011
There is a mysterious and rare flower called the Queen of the Night. It is a species of cactus that requires year round care and attention in order to be brought to it's magnificent bloom.
If properly cared for, the Queen of the Night will live up to its name. One single night out of the year, it will slowly open, layer after layer, until fully bloomed. The flower emits a strange and glorious fragrance unlike any other. And in just a few hours, it will wilt, not to be seen again for another 364 nights.
This Queen of the Night bloomed at Thomas Edison's Greenhouse 2 nights ago. The photos were taken by my husband, Eddie, one of only two people to witness this rarity. 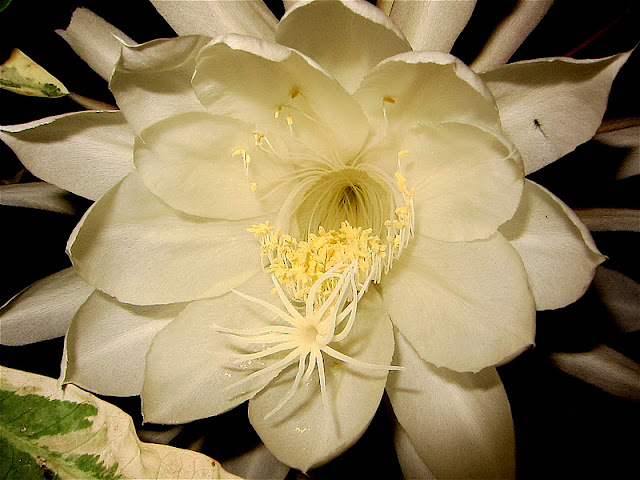 "A rare experience of a moment at daybreak, when something in nature seems to reveal all consciousness, cannot be explained at noon. Yet it is part of the day's unity."
-Charles Ives 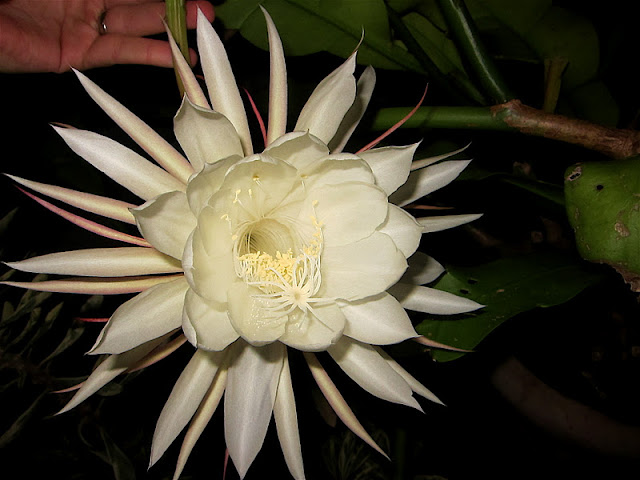 "It isn't given for us to know those rare moments when people are wide open and the lightest touch can wither or heal. A moment too late and we can never reach them any more in this world."
-F. Scott Fitzgerald 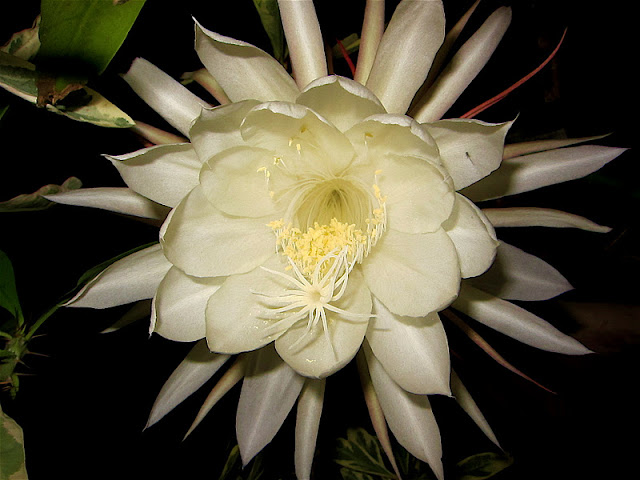 Helma said…
Ohhhhhhhh ..... what a great close-ups of this flower. Truly breathtaking.

Cheryl Kohan said…
What a wonderful experience for Eddie! It's simply stunning and isn't it great that you have photos of it!
October 19, 2011 at 8:24 PM

Linda at To Behold The Beauty said…
Eddie did a terrific job of capturing the images of this beautiful flower. Thanks so much for sharing it with us, your readers. Most of us will never see one in real life.
October 20, 2011 at 10:37 AM

Dave King said…
It must have been a wonderful experience. The images are wonderful, so is the post.
October 22, 2011 at 6:03 AM

And my lips remain firmly sealed against making any comparison with a certain female body part.

Or maybe not sealed. Maybe pressed against.

Oh dear. This has potential for becoming naughty. If one's mind to bend in that direction.

Kim@stuffcould.... said…
Wow! This flower is breathtakingly beautiful....You should watermark these pics. I may steal it but if I use it, I would give you credit.
October 24, 2011 at 3:09 PM

Yolanda said…
Such a beautiful photo and flower. I have never seen one so pretty. Thanks for sharing it and for inspiring me today.
October 27, 2011 at 7:22 PM