January 30, 2012
After an intense week as a participant in the Musician's Mentorship Program with Canada's National Ballet School in Toronto, I am back in the good ol' US of A. The trip was a success, not only did I learn a TON in the program, but I got to see Canada for the first time, increasing my number of countries visited to 3! (Mexico and South Korea, if you're wondering about the other 2).
I was surrounded by incredibly talented musicians who didn't hesitate to dish out their best advice, tips, and secrets to me. In addition, I was surrounded by some beautiful scenery and amazing sights. The trip got even better when Eddie flew out to meet me half way through the week, and even BETTER when I was able to meet up with a friend, known only through the blogosphere until now. Yes ladies and gentlemen, Hilary of The Smitten Image herself happens to live only minutes from where I resided in Toronto.
I admit, it was a little like meeting a celebrity. I first "met" Hilary when I discovered a beautiful photo of hers that I wanted to use for one of my posts (A Brave Leaf) back in October of 2010. She granted me permission to borrow it, and we became followers of each other's blogs. I had very few readers of my humble little blog until one day, Hilary selected my post as one of her choices for Post of the Week (The Eleventh Hour). Suddenly I had comments from people other than my mother! Well, things grew from there. I'm sure many of you are familiar with her stunning photography, and yes, I saw the camera myself, as well as the little pond where many of her masterpieces are captured. It was a wonderful evening with Hilary, her son Alex, and his girlfriend Veronica. I love how technology can connect us to amazing people we would have never otherwise known existed!
Eddie and I had just enough time at the end of the trip to make it to Niagara Falls. We ate dinner in a restaurant overlooking the Falls and even got a fireworks show. It was a breathtaking view that my photography skills don't even come close to doing justice to.
Eddie arrived to Canada by flying into Buffalo, NY and driving over the border, because he wasn't allowed to fly into Canada without a passport. When I explained this to several different people throughout the week, their reaction was always the same, a bit of a gasp, followed by, "He might have trouble getting back over the border." I wasn't all that worried about it, but Eddie was a different story. As we approached the border in our car, Eddie grew more and more fidgety and nervous, "Should we claim the maple syrup we have in the back seat?" I admit, I chucked as he rubbed his jeans anxiously, waiting to speak to the U.S. guard. Eddie called the guard "Sir" about 15 times in a matter of 2 minutes and I was certain he noticed we were acting suspicious. But in the end, all our identification was accepted and we were let back in with no problems. I couldn't help thinking of this episode of "Frasier" when they cross the Canadian border with Daphne, an English immigrant with no green card:
Below are some photos from the week (click to enlarge). Enjoy! :) 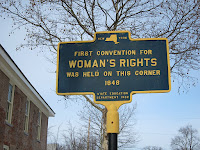 This is the Women's Rights National Park in Seneca Falls, NY 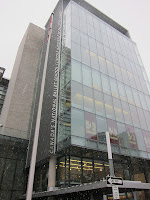 Canada's National Ballet School is a beautiful facility in the heart of downtown Toronto. 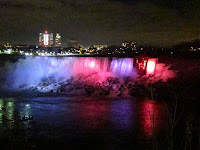 Niagara Falls at night...it was amazing! 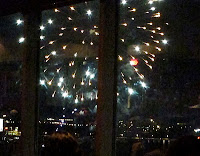 Fireworks right outside our window...awesome! 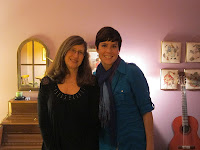 Hilary and I, a piano and guitar in the background. I felt right at home! 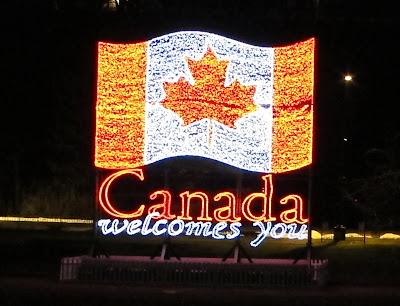 Canada welcomed me, and I thank you Canada!

smartcat said…
Hi...I found you through Gary's Third Pottery Blog. I'm enjoying reading your posts. The 2/4/10 post was such a nice way to introduce yourself and explain your thoughts. We forget about the magic in the humdrum of everyday life.
Before I retired I worked with high functioning developmentally delayed adults. One of the exercises a staff member came up with to help overcome negativity he called Yin-Yang....for every negative thought they had to come up with a positive...it helped the clients, and the staff used to use it as a learning tool.
Thanks....-s-
January 30, 2012 at 11:22 AM

Slamdunk said…
Sounds like a super time Elizabeth. Glad you got to meet Hilary--her blog is fantastic.
January 30, 2012 at 11:43 AM

Linda at To Behold The Beauty said…
I'm so glad the week was such a success. And what a treat to be able to include a visit with Hilary, Alex, and Veronica. I love the photo of you and Hilary. It's good of both of you.
January 30, 2012 at 11:49 AM

Hilary said…
I'm glad that you and Eddie had such a good time north of the border, Elizabeth. It was a true pleasure to meet the two of you and I hope that course has a part 2, so that you can visit again sometime.

Anonymous said…
Looks like an amazing trip. AND you met the famous Hilary! Huh! Blogging really does open us up to new friends and new experiences...
January 30, 2012 at 3:47 PM

Busy Bee Suz said…
What a wonderful experience for you both! I'm so glad Eddie made it back into the country; those Canadians can be brutal. :)
I miss Frasier!
January 30, 2012 at 5:26 PM

Rick said…
Thank you for visiting the 'Great White North' Elizabeth - hope you weren't disappointed by the lack of snow, and glad you had a great time ! That Frasier segment was hilarious. We've crossed the border countless times and have experienced nothing but courtesy - on both sides. And yes, blogging does introduce us to many great people, all over the world !

Nice to read that your greatest fans (well, next to Eddie) could hear you perform.

And that was a touching 9/11 story (as well as great photos). We were in NYC 3 weeks after that tragedy visiting our son who was completing school there - saw all the devastation and the memorials to the fallen. Made a lasting impression.
January 31, 2012 at 1:23 AM

Dan said…
Congratulations to you both for making time to connect. Happy to read you first Canadian trip was a grand success.
January 31, 2012 at 3:13 AM

Elisabeth said…
I'm here via Hilary. How lovely it is that you two met and also how lovely for me to hear your voice . Pity about the background noise but it gave me a sense of your beautiful singing. I'm very pleased to meet you here.
January 31, 2012 at 4:46 AM

Shammickite said…
I've just come over here from Hilary's blog.... how wonderful for you and Hilary and Eddie too, to spend some time together. That's what blogging is all about isn't it? Making new friends and sharing experiences. And I'm so glad that you enjoyed your visit to Canada. In my opinion, the best country in the world!
January 31, 2012 at 7:32 AM

Steve Gravano said…
Sounds like fun! I'd love to travel around and meet some of the folks from the blogoshere! Our family drove across the boarder from Buffalo to Niagara a few years ago. I was so nervous, my wife thought they weren't going to let us in. I gave them our old address, the wrong number of children in the car.... it was horrible! We laugh now, actually they were laughing then.....
January 31, 2012 at 3:56 PM

Pauline said…
Hilary is the best when it comes to introducing bloggers to one another. I've enjoyed my read here immensely.
February 1, 2012 at 5:04 PM

Barb said…
Hello Elizabeth, I came to visit you from Hilary's Blog. It's fun to meet a fellow blogger in person - I've done so several times. Sounds like you had a busy time in Canada.
February 1, 2012 at 6:54 PM

Dave said…
Hi Elizabeth. I came here from Hilary's blog. I admire your musical and singing talent. Good luck with your musical career - Dave (NZ)
February 3, 2012 at 3:13 AM

Jayne said…
Elizabeth- what an exciting trip! We travel to Canada (Quebec) often and I can't believe what we smuggle, er, take back over the border. Mostly squeaky cheese and wine, but by the carload!

I've admired Hilary's photography since I started blogging. So wonderful that the two of you got to meet in flesh and blood. Pretty magical moment! ;)
February 9, 2012 at 7:58 AM

Debbie said…
What a exciting time for you and Eddie, sorry just now reading trying to catch up
February 13, 2012 at 1:03 PM