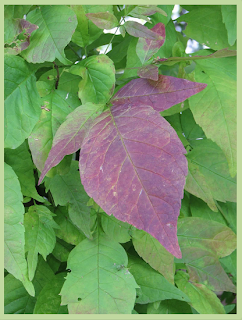 "A Brave Leaf"
by Elizabeth Grimes
A little boy walked home from school.
Summer was gone, the air was cool.
The leaves were still green though, all but one.
Its vibrant color stood out like the sun.
He waived goodbye to his friends at the door,
Then remembered with guilt what happened before.
They’d teased another, called him some names.
Now all alone, he felt so ashamed.
He knew it was wrong, but what could he do?
If he walked away, he’d be laughed at too.
But he made a choice right there in his room
That starting tomorrow, a new him would bloom.
He was kind to that boy, stood by his side.
And together a fortress in which to confide.
Soon others took notice, and joined the two.
Now there were many against mean crew.
Walking home, the boy noticed the trees.
There weren’t just one, but dozens of bright leaves!
The boy thought, “Hmm. Isn’t that strange?
It only took one for that whole tree to change.”

Hilary said…
This is a lovely poem, Elizabeth. And a gentle reminder to not just stand by when bullying occurs. Thanks also for the linkage to my blog. This is a fine use of my photo. :)
October 26, 2010 at 6:07 PM

Elizabeth Grimes said…
Thank you Hilary, such beautiful photos on your blog. I really enjoyed!
October 26, 2010 at 9:12 PM