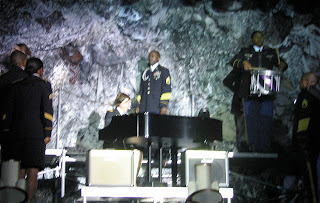 Me at the piano during the finale of one of our shows
The best months I ever spent in the Army, was the tour of the 2007 Army Soldier Show, in which I was one of the 13 performers. The Army Soldier Show, was founded by none other than Irving Berlin himself when he was a soldier in World War II, and has carried on through the decades as a musical variety show "for the soldier, by the soldier."

One of my superior officers at the time, sent me an e-mail one day with the audition information for the show. I had never heard of it before, but immediately got chills when I learned more about it. Unfortunately, the deadline for submission was the following day, by midnight. I would need to make an audition video and overnight it that very day. I begged my supervisor to grant me the rest of the afternoon to work on it, and after much reluctance he finally consented. I borrowed a video camera and threw together a very home-made video of me singing and playing "Bye Bye Blackbird" and "Cold Cold Heart" (Hmm, I never realized that both titles had repeat words. Funny). Then I raced back to post, collected all the official signatures I needed, and shipped it overnight at the UPS store.

A few weeks later, the Soldier Show officials at Fort Belvoir, VA, invited me down for a live audition. If I made the cut, I would remain there for 2 months of rehearsals, and then immediately begin an 8 month tour across the country. So I had to find care for my apartment, car, and dog under the assumption and hope that I passed the audition and would not be returning to my unit and home for the next 10 months.

After some very difficult rehearsals and an extremely nerve-racking live audition, I made the cut. Thus began 2 months of even more intense rehearsals with former Broadway choreographers, scholarly musical coaches, and a highly esteemed director, Victor Hurtado. Everything in the show was state of the art - the stage equipment, lighting, and music was all top of the line, professional, and way more than I had ever dreamed of at that time. In the show, I did everything from play the piano, to sing, to tap dance as a penguin - honestly, I did. It was an amazing show with an amazing cast.

The reason that these months were the best for me, was because I felt like a real soldier. Funny considering I was singing and dancing. But we worked, I mean WORKED. We did all of our own tech-ins and outs and let me tell you, that is the hardest manual labor I've ever done in the Army, or in my life. And I was a paratrooper. But more than that, I served. Like a soldier is supposed to serve. I gave my whole heart every night, for hundreds of people. And at the end of the night, when we were clothed in our Army dress blue uniforms, the flag was raised behind us, and the audience began to applaud, I was flooded with an immense feeling of pride. They were not clapping for me, they were clapping for all of us. All the soldiers. The flag. Their families. The history. The future. And remembering all those things is what being a soldier is about.

I found this 5 minute video today, in which I pieced together snippets of footage from the show. I could kick myself for never buying a real video camera to record it fully or with decent sound. Instead, Eddie captured 30 seconds at a time on his camera from the audience. I posted this on facebook, and then somehow I deleted the file from my computer (Argh!). So it only remains on facebook and you can view it at this link if you have a facebook account.
http://www.facebook.com/video/video.php?v=383616039547

If you don't have a facebook account, and you want to view it, click on this link and watch the video closest to the top entitled "Soldier Show Montage":
http://www.facebook.com/pages/Elizabeth-Grimes/10150140553240405?ref=ts 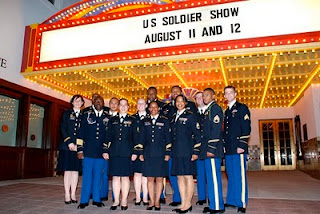