June 01, 2011
A few years ago, I took my nephew, Ethan, to a beach in North Carolina. He was only 3 at the time and it was his first visit to the shore. He was terrified in awe of the ocean, and the endless sand was new and fascinating. But above all, he was most amazed at the seagulls.
They were everywhere, and so close too! Why, he could almost reach out and grab one! Well, this became a novel idea and it's exactly what he tried to do. Over and over. It didn't take long for him to learn that they fly away awfully fast, and so he had to be ready to run. He would get close, they would get ready for take off, and then just like that, Ethan would be toddling down the shore at full speed trying to catch that tricky bird. When it flew away, another was right there, so near his grasp. He ran up and down the beach all day long and it never occurred to him that he might not catch a seagull after all. And I never told him that it was unlikely.
I hope he always thinks he can catch a seagull. I hope no one ever tells him he can't. And when one seagull slips from his reach, I hope another will always be right there, and he'll go for it with all his might. 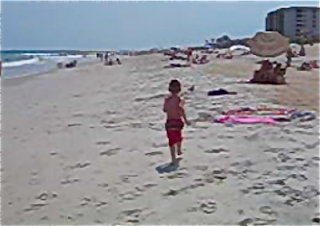 Go Ethan, go!
"There is no telling how many miles you will have to run while chasing a dream. "
~Author Unknown
"When the world says, 'Give up,
Hope whispers, 'Try it one more time.'"
~Author Unknown

Linda at To Behold The Beauty said…
What a charming story and inspirational application. I love the quotations you included with this post, too.
June 1, 2011 at 10:58 AM

Claudya Martinez said…
I love that! Watching children try and try again without losing hope or feeling let down. It's beautiful.
June 2, 2011 at 12:02 AM