June 02, 2011
I met Fauna a few days ago in the National Park where my husband is a Park Ranger. I haven't gone back to see her yet, but I asked Eddie to keep a look out for her. I want to follow her progress, and since the Park is surrounded by an urban area, I want to make sure she stays safe from passing cars.
During one of his late security checks, he was near the parking lot and was shocked to find that he literally almost stepped on her. He was so close he could reach his arm out and touch her if he wanted. Instead, he snapped this picture for me, then carried on. He called me from work to tell me what he saw, but that he hadn't seen the mother.
I was a little worried. It may be hard to tell from this picture, but she is tiny. Really the size of a dog, and her fur is still fuzzy. So why wasn't her mother with her late at night when the predators are out?! Google, or as I refer to it, my smart best friend, came to the rescue. It turns out that fawns who are less than 3 weeks old, do not carry a scent! But because the mothers do carry a scent, they stay separate from their babies a great deal of the time so as not to attract predators to her baby. The fawns are taught that when a predator is near, to stay perfectly still. And that's exactly what Fauna did when Eddie stumbled across her. She was so brave and didn't move a muscle. Her mother was most likely near by, and would only interfere if she sincerely believed Eddie to be a threat. But perhaps Fauna and her mother will learn for next time, that sleeping only feet away from a parking lot is not the best place for her, and she'll move to a safer spot tomorrow night.
I know now that Fauna is under 3 weeks old. Unbelievable. I've never seen a deer that young. I'm fascinated with her and will continue keep up with her growth. I'm sure you'll see updates as she progresses. (Oh, if anyone out there knows anything about fawns, leave it in the comments. I'd love to learn more). 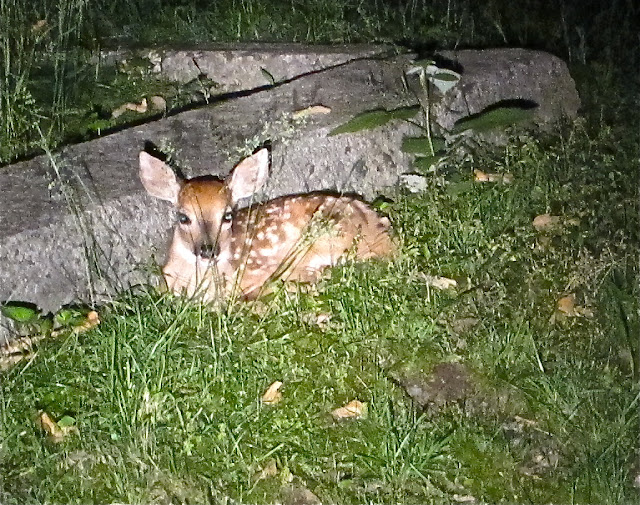 Hilary said…
It must have taken a lot of inner strength to keep from touching that little beauty. I would be so tempted yet I do know better. Such a darling creature. She has big ears to grow into. :)
June 2, 2011 at 10:06 AM

Unknown said…
I had no idea about the babies having no scent, and neither did my hunter husband. Fascinating! And good on Eddie for grabbing that shot for you!
June 2, 2011 at 8:04 PM

Rick said…
God knew what He was doing when He created them this way. And one day they too will sleep with the lions. and wolves. and coyotes.