Magical Moment 286, "The Decision to Stay" 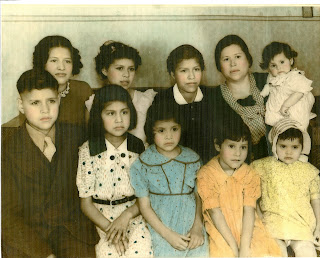 My Great-Grandma (top right) and 9 of her 10 children

“It is from numberless diverse acts of courage and belief that human history is shaped. Each time a man [or woman] stands up for an ideal, or acts to improve the lot of others, or strikes out against injustice, [s]he sends forth a tiny ripple of hope.”
-Robert Francis Kennedy

I watched a single rain droplet slide off an orange leaf, and into a giant puddle that formed on the sidewalk. The puddle flowed into a crevice in the pavement and created a stream of rainwater that made its way down a muddy hill and trickled into a creek below. I watched the waves and ripples spread like an outstretched hand until I lost track of which one came from where. I wonder if that first drop knew what it would become a part of.

My maternal grandmother is the most patriotic person I’ve ever known. She is the human embodiment of yellow ribbons, American flags, military parades, and Ray Charles singing “America the Beautiful.” Though her blood is 100% Mexican, her heart is 100% American.

There is possibly one other person who has ever existed, that has more passion for the U.S. of A than my Granny, though I never had the pleasure of meeting them. Maria Loreto Alonzo Valencia, her mother. I’ve only heard stories of her, making tortillas from scratch, hanging clothes out on the line, and learning English. And with my own pale skin, green eyes, and freckles, her amazing story of immigration seems as far away and fictional to me, as a movie on the big screen.

She was from Leon Granojuato, Mexico and married Francisco Cohenete Valencia from Michoacan, Mexico. Together they moved to America and had 10 children (my grandma being the second youngest). They ended up in Lincoln Nebraska of all places, in a narrow 2-story house where my Grandma lives to this day. In an unfortunate accident with the Union Pacific Railroad, where Francisco worked, he was blinded and decided to return to his Mexican village. And this is where Mrs. Valencia never ceases to amaze me, even decades after her passing. For when I think of courage, ambition, and hope, I think of this. She decided to stay.

Before the convenient help of the internet, support groups, daycare, or washing machines, she chose to remain here with little education, in a foreign country, as a single mother of 10. Why? I don’t know. I wish I could ask her, interview her. But using my deductive reasoning skills, I can only conclude that she loved her children more than anything in the world, and wanted to give them every opportunity to succeed. She fell in love with this country and became a volunteer and activist in her community. I’ve even heard it said that she is credited with getting Peach Street paved, the street they lived on. She became a naturalized citizen in 1943, her 2 sons became World War II Veterans, and the rest of her children followed in her patriotic footsteps, a trait I never scientifically believed could be inherited, but in this case must be.

One day, I saw my grandma gaze upon a framed picture of her dear mother that hangs on the old walls of her childhood home. She looked at it with such pride, love, and admiration, and still refers to her as "Mama." That’s when I realized I may never know just how remarkable of a person Maria Loreto Alonzo Valencia truly was, but somehow, there is a piece of her in me, my sisters, my cousins, their children, grandchildren, great-grandchildren…. Her hard work, turmoil, heartache was not in vain. I would never exist, never have the privilege of knowing my grandma, my husband. I become overwhelmed when I begin to think about all the people and lives affected, and I will forever be appreciative and thankful for this one woman’s brave decision to stay.

Dawn said…
This is a wonderful story....a history to be proud of and cherished.
It's wonderful to look back and realize that one person and a decision they made, has brought you up to the point where you are. An overwhelming and powerful thought.
Makes you wonder what decisions we make day to day ....how it will affect those who follow us....

Cheryl Kohan said…
I agree with Dawn...it's a wonderful story. These are the kinds of memories that need to be shared so thanks for sharing!
November 17, 2010 at 9:46 PM

Elizabeth Grimes said…
Thank you Dawn and Cheryl for your kind words! I'm glad you enjoyed a little bit of my family history.
November 17, 2010 at 9:51 PM

laughwithusblog said…
Fascinating! I had forgotten that ya'll had some Mexican roots. No wonder I like you guys so much! ;)
November 18, 2010 at 11:22 AM

Eddie said…
Her decision was a pretty good one for me too, because I don't know where I'd be without Elizabeth. Thank you, Maria Loreto Alonzo Valencia.
November 18, 2010 at 4:00 PM

Unknown said…
My boyfriend found your story when his brother told him about it. He read it and said that when he was little, he was told the story of Francisco Cohenete Valencia and about what happened to him at the railroad. My boyfriend's last name is also Cohenete and is also from a small village in Michoacan. He says that Francisco was his grandpa's uncle. He wanted to share his connection to this great story.
July 31, 2013 at 7:17 PM